If you want to know what makes a country tick, what better way than to study their TV habits? If you think us Brits are a nation of lager-swilling, football watching, royalty-obsessed couch potatoes with an over-inflated sense of national pride, then you may just be onto something. Not that there’s anything wrong with any of that – in fact, it’s nice to know we all have something in common. So the next time you see politicians trying to sow the seeds of division in your community, remember, we’re all just one big happy, telly watching family. Right, put the kettle on – here’s the top ten most watched UK TV programmes countdown.

Broadcast on the 12th August 2012, this £20m spectacle was seen by more than 24 million viewers across the nation. With the olympic stadium venue transformed into a giant representation of the Union Flag, designed by iconic artist Damien Hirst, it was a celebration of everything British. From the Beatles to Bohemian Rhapsody, Kate Bush to Russell Brand and Blur to Britain’s Got Talent, this was an extravaganza par excellence. They even got the Spice Girls out of retirement. FYI: that’s how you know when a party is over.

Did you know that the opening credits to Coronation Street were never meant to feature the now iconic cat walking along a wall? When the original titles were re-filmed in the 70’s none of the crew noticed the cat until it was too late. Now, they make sure to include a cat every time the credits are updated. But the glory days are behind them it seems. Their most watched episode was all the way back in 1987, when nearly 27 million viewers tuned in to watch the departure of Hilda Ogden. Good riddance, I say!

If there’s one thing the British public loves above (almost) all else, it’s a royal wedding. And this was no exception. She may not be heir to the throne, but the Queen’s only daughter didn’t half pull a crowd for her special day. With nearly 28 million viewers at home, and close to half a billion worldwide, I’m willing to bet she spent months rehearsing her vows. Most interesting of all, this was only the 2nd royal wedding in 200 years where a member of the royal family married a commoner. Good on yer, Anne!

7. The Royal wedding of Prince Charles and Lady Diana, 1981

The royal wedding to end all royal weddings, and the most watched one in our list. This was a no-holds-barred national celebration for the Queen’s eldest son, and heir to the throne. Watching it on TV was a consolation prize for the 28.4 million viewers; more than 600,000 well-wishers lined the streets to wish the couple well. Despite Lady Diana getting the groom’s name wrong during the ceremony, the day was a triumph, and was watched by some 750 million viewers around the world. To be fair to Lady Di, that is a lot of pressure.

In the ultimate expression of the battle between North and South, the 1970 FA cup final was truly a clash of the titans. Despite the poor condition of the pitch thanks to the horse of the year show the previous week, Wembley Stadium was awash with anticipation. And neither team was prepared to give up the fight. It was the first cup final in 58 years to end in a draw: 2-2; and the first to attract such a massive TV audience (28.5 million). A replay was scheduled later in the month at Old Trafford where Chelsea finally claimed the trophy at 2-1.

As the world held it’s breath to find out whether the Apollo 13 landing module heat shield would hold out, 28.6 million Brits tuned into their beloved BBC to watch events unfold live on the air. Originally intended to be a moon landing mission, the landing was aborted after the service module was crippled by an exploding oxygen tank. Not knowing whether the explosion had also damaged their heat shield, the ground crew endured 6 minutes of radio silence as the air around the capsule ionised, blocking radio reception. They don’t make reality telly like that anymore.

Oi oi, lock up your daughters, Dirty Den’s back on the prowl. In this gripping Christmas day episode, Den divorces Angie right out of the blue. As 30.1 million viewers spat out/ choked on their roast dinner in surprise, the Christmas soap opera shocker trend was born. To get a reaction like that nowadays you’d probably have to bring Nick Cotton back from the grave and have turn him into Santa Claus. Sounds unlikely, but this is Eastenders we’re talking about. You heard it here first folks.

It’s just as well that this fly-on-the-wall documentary offering a rare glimpse into the royal household was seen by a whopping 30 million viewers. Because after it was aired twice on the telly, the royal household deemed it too revealing, and had it locked in a vault for the next 40 years. They’re obviously still a bit touchy about the whole thing, because although they’ve allowed the National Portrait Gallery to show a clip as part of an exhibition, that clip is only 90 seconds long.

It was one of those moments that everyone remembers where they were and what they were doing when they first heard of Diana’s death. The national outpouring of grief was overwhelming, so much so that even the Queen herself looked slightly alarmed. But Diana really was the people’s princess, drawing more than 32 million viewers as her funeral cortege processed along Hyde Park to St James’s Palace. The piece de resistance of course was Elton John singing Candle in the Wind at the end. Not a dry eye in the country, let alone the house.

When it comes to sport, Britain is how shall we say, a little awkward. We invent sports that are played and watched all over the world, and then spectacularly fail to win at them. Tennis. Cricket. Football. Well, on 30th July 1966 England wasn’t going to take it anymore. And we didn’t just beat West Germany (don’t you just love the cold war) – we thrashed them 4-2. Geoff Hurst scored the first ever world cup final hat trick, and England finally got a chance to celebrate. And it’s been downhill ever since. 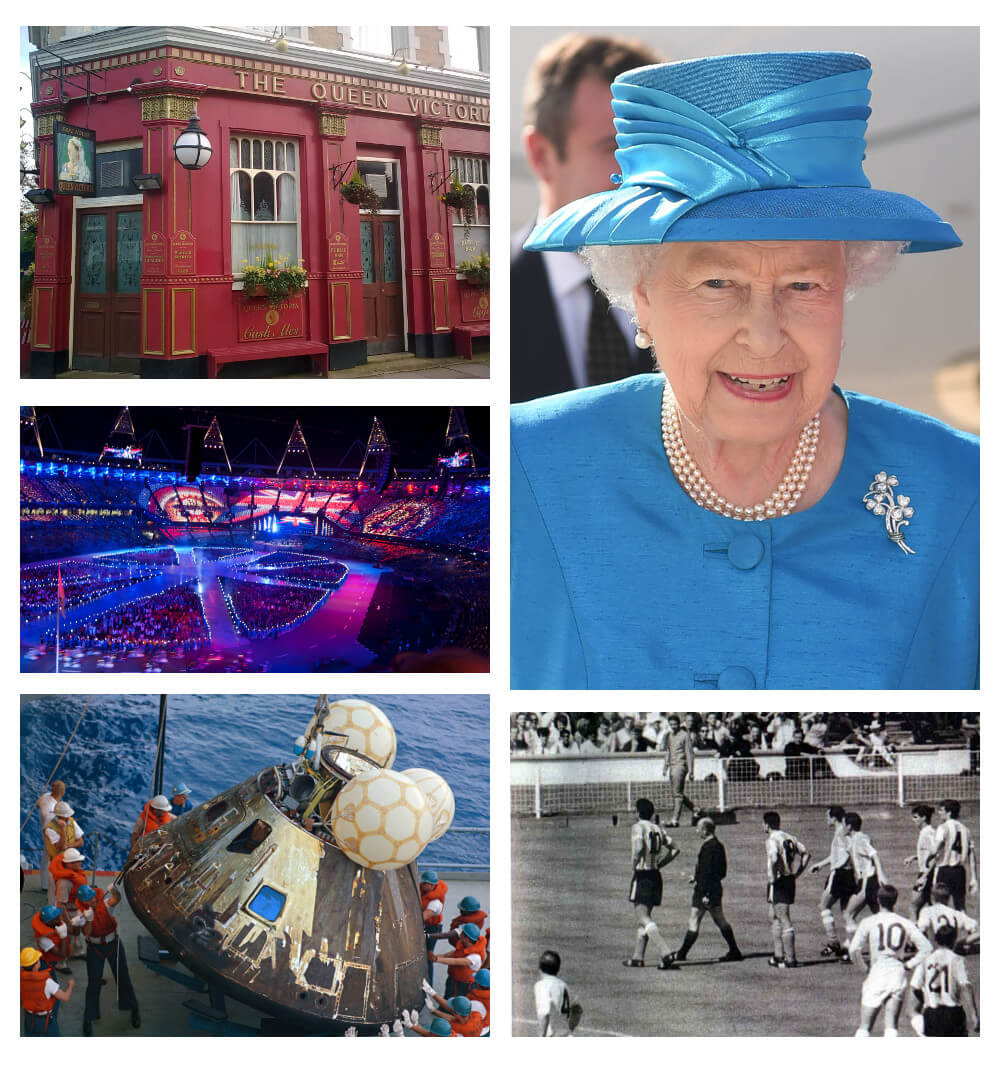