So. You’ve seen David Beckham rocking a pink scarf in a glossy magazine, and your girlfriend gets weak in the knees just from looking at it? Been there, bought the tee shirt my friend. Ah – but was it a pink tee shirt? Well, how about we keep that under wraps for now, and tell you at the end of the article? Meantime, if you’re wondering whether you’ve got the swagger to pull it off, here’s the discerning man’s guide to wearing pink.

Everyone knows pink is for GIRLS

Or at least, that’s what society would have you believe. And yet, evidence to the contrary is written all over the fashion pages of history, as far back as the 19th century. Actually, the idea that pink is a colour for little girls didn’t really begin to take hold until the 1950’s. Clever marketers realised that parents wouldn’t hand down clothes between siblings of the opposite sex if they thought they should be wearing different colours. Instead, they’d have to buy new clothes – a nice little earner, no? But there’s more. Fast-forward to the 1970s and 80s, and it became commonplace for parents to know the sex of their baby prior to birth. This enabled them to go out and buy gender-specific clothing instead of gender neutral clothes which were previously the norm. In fact, back at the start of the 20th century, the norm was to dress babies of both sexes in white dresses. But that’s another story…

Did you know that men wearing pink was both normal and unremarkable in the 1920s? Back then pink was considered a masculine colour (that’s right!), and was typically worn by serving and working class men. F. Scott Fitzgerald’s classic The Great Gatsby has a great example. In one scene our immaculate-in-pink protagonist is bragging about having graduated from Oxford university, and is instantly accused of lying by villain Tom Buchanan who exclaims, “Like hell he is! He wears a pink suit.” You’ll notice that Gatsby’s masculinity was never taken into question – merely his socio-economic standing. And that’s not all the literature of the day has to say on the matter. A 1918 trade magazine called Earnshaw’s Infants clearly states: “the generally accepted rule is pink for the boy and blue for the girl. The reason is that pink, being a more decided and stronger color, is more suitable for the boy, while blue, which is more delicate and dainty, is prettier for the girl.” How are you feeling in that blue sweater right now, bro?

So we’ve established that the man in pink dilemma is a much more recent and arbitrary trend than you probably realised. What you may still want to know is: how can you wear pink and get away with it? Well, everyone is different, but if you’re looking for failsafe options, here’s a quick primer:

Also bear in mind that pink tends to work better with darker skin tones, especially the paler pinks. So if you’re as pasty as an albino vampire, you might want to choose something with a little more vibrancy. And as for us – you’re dying to know, aren’t you? Did we buy the tee shirt in pink? Of course we did. If it’s good enough for Beckham, it’s good enough for Showtime! 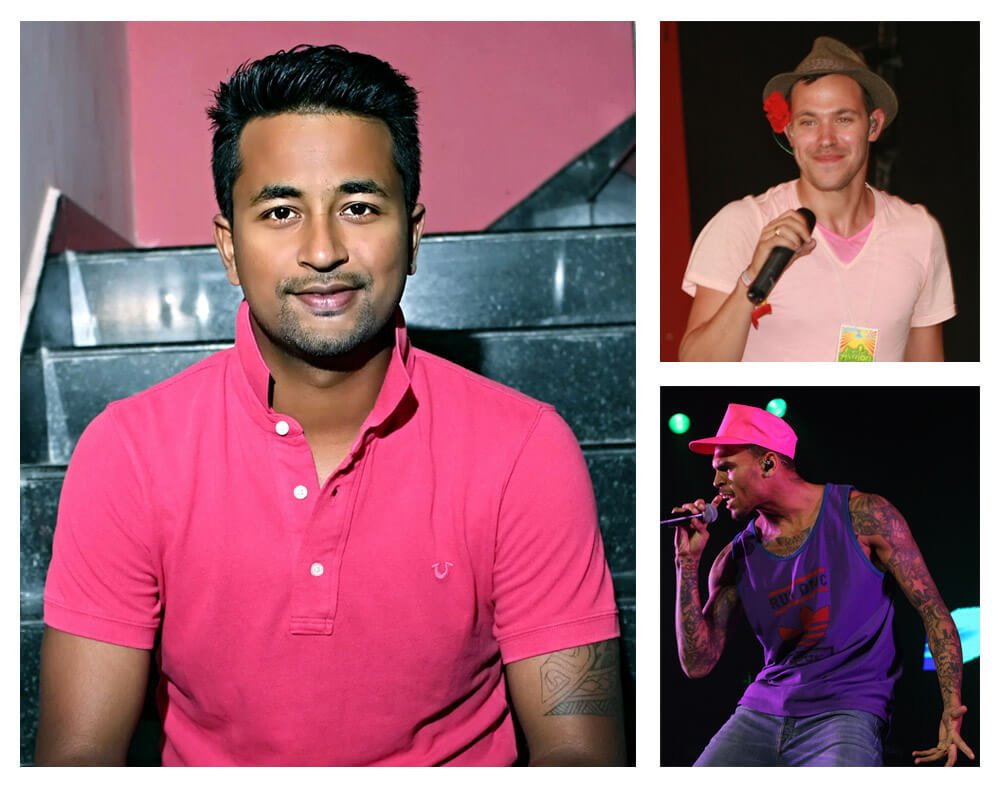